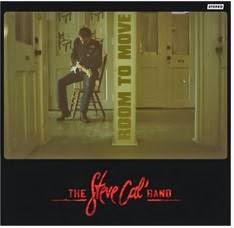 Steve Cal’ is an emerging blues artist from Philadelphia, PA. Picking up the guitar at the age of eight, after hearing Santana’s “Samba Pa Ti,” he began playing professionally by the tender age of 14. The “Hendrix-esque” Room to Move is Steve Cal’s second album. The sound is raw, but not underproduced and the record has a “live in the studio” sound and feel. This is a breath of fresh air compared to the the current ‘Nashville-esque” sound of some of the major artists today.
Even though the recording has a very live feel, Room to Move is a typical blues record in the sense that Steve hits all the bases from funky tracks like  “Midnight Dream” and “Dirty Old Woman,” to the slow hard-driving blues of “Voodo Chile.” Kudos to Steve for not covering “Voodoo Chile (Slight Return)” which may be the most over covered blues rock song of all time.  The last three tracks on the album are in the slow blues tradition, which leaves the listener a bit hungry for the funk of the first part of the album
There are four originals and four remakes. Steve’s songwriting is solid, but remakes are always a good idea for young artists. It’s a time-honored tradition in blues to show what you can do with a standard or other great song and Steve does not disappoint. His remake of Stephen Stills’ “Go Back Home” is an excellent example of how Steve can pay homage, and yet put his unique stamp on a track.
Room to Move is a solid indie blues album. The rhythm section of Sandy Eldred on bass and Felix Manzi on drums is a good fit. Steve plays with a lot of intensity, squeezing the most out of each phrase that he possibly can. This is a young artist and band and it will be interesting to see how they develop.
The Review: 9/10
Can’t Miss Tracks
– Midnight Dream
– Dirty Old Woman
– Voodoo Chile
– Go Back Home
Big Hit
– Dirty Old Woman