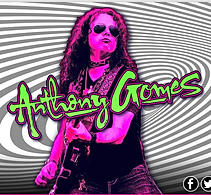 It might be easy to sum up the latest album by Anthony Gomes with one word, “fun” but it’s so much more. While Electric Field Holler may be a record that doesn’t take itself too seriously it is by no means comedic. Electric Field Holler is a raucous celebration of blues based guitar driven rock. From the “more cowbell” intro of “Turn it up” to the joyful innuendo  of “Junk in the Trunk,”  Anthony makes no apologies. He is here to rock the house and that’s exactly what he does.

With his powerful picking attack and Hendrix on krank phrasing, Anthony’s guitar playing sounds as good as ever. He tears up lead after lead, with soulful lines peppered with bursts of shred.  He also has a great sense of melody. For instance, his solo on “Love Crazy” becomes another hook in the song (a melodic lesson in restraint). Theo Harden (bass) and Chad Cromwell (drums) keep it solid and simple and David Smith’s keyboards provide some smooth texture without ever over shadowing Anthony’s hard driving rhythm playing. Electric Field Holler also features some of the best vocal performances of Anthony’s career. He’s got all the soul of an Otis Redding on the tongue-in-cheek “The Blues Ain’t the Blue’s No More” and all the swagger of Steven Tyler on “Back Door Scratching.”

The songwriting is well crafted and to the point. His lyrics tickle your ear just as much as his guitar playing and singing. Check out the story telling in “Redhanded Blues” and “Junk in the Trunk” and the down home spiritual musings of “Listen to the Universe.”

Like many of the classic rock artists of the 1960s and 1970s Anthony joyfully blurs the distinction between the blues and rock and roll. One could  postulate that if Electric Field Holler had been released in 1975 instead of 2015 it would easily top the the rock charts and dominate FM rock radio. If you long for the days when artists like Johnny Winter and Rick Derringer packed stadiums you will adore Electric Field Holler.

There are no comments yet, add one below.